Today I visited the Haarlem winter beer festival here in the Netherlands, and while they definitely had some good beers it was pretty much an HSP nightmare. I had kind of envisioned a Christmas market type of atmosphere with different stalls out in the open air, between which you could wander and sample various beers. This based on my imagination and my only previous experience with a beer festival – in a small Belgian village 5 or so years ago.

What I got was a fairly large party tent chock-full of people and loud music. It’s the kind of place I’d normally not even be dragged into. But, I had paid for a starter packet and had a date with a friend, so I boldly went where no HSPs have (willingly) gone before.

I consider it a fairly successful outing. I think because I decided to make my peace with it as soon as I arrived: “this is what it’s like here, just suck it up and have a few beers and if you don’t like it you can always leave”. I didn’t have a panic attack or any trouble breathing, though I can’t say I was particularly comfortable. But the more beer I drank the less I cared about the stark, loud and pungent environment. Which reminded me both why I love alcohol and why it’s such a dangerous thing.

Anyway, despite the throngs and the clamour, I did have some really nice beers (one in particular) and I even managed to talk with my friend a while when we found a secret “dead zone” behind the speakers.

I’ll give a short recap as there wasn’t much time to reflect, nor room to take pictures or write stuff down. Also, just to be clear I did not have 6 full size beers, these were sampler glasses 😉

Nice porter with some depth, only slight bitterness and a slightly salty flavour that reminded me of something very specific that I just couldn’t place. For now I’m going to say it was slightly oaty.

Very nice, deep, rich stout – just the kind of beer I like. Definitely a defined coffee (espresso) flavour with the bitterness that comes with it (not too much though, well balanced) and a dark chocolaty sweetness.

This was a slightly lighter, nice and malty sweet ale with some herbal/spicy aromas. Fitting for the season. Also a little salty, maybe some liquorice flavour.

This one was surprisingly herbal, almost like beer mixed with a Ricola lozenge, but in a good way. It was quite sweet but well balanced with the herbal/spicy flavours.

Wowee! This is definitely the best beer I’ve had in recent memory. So rich and deep and sweet with a bit of smoky and coffee flavour as well as a brown sugar/dark chocolate sweetness. And when I looked it up just now I learned it’s been smoked over sheep dung… Yikes! Those whacky Icelanders! But it’s still so good I would drink again without hesitation. And I know it really was good because the next and last beer I liked less than this, so it wasn’t just a matter of me getting drunker and each consecutive beer getting better. 😉

This was a seriously boozy one; coming in at 12,2% it was the strongest beer at the festival. But with a name like that (full name: Solomon’s Judgement B.A. Scottish Whisky & Cognac) I couldn’t pass it up. I did feel it was a bit too boozy though, the smell was really overpowering and it had a decidedly alcoholic flavour to it. The other flavours where really nice though. It tasted actually a lot like port or sherry mixed with a stout – some really rich sweetness to it, and a bit of liquorice as well. A good one to end with.

And as if I hadn’t had enough beer I decided to have the 4th beer from my advent calendar when I got home, because it was a Japanese Pale Ale with horseradish and we ordered a buttload of sushi so I figured it would go nicely. So, without further ado: 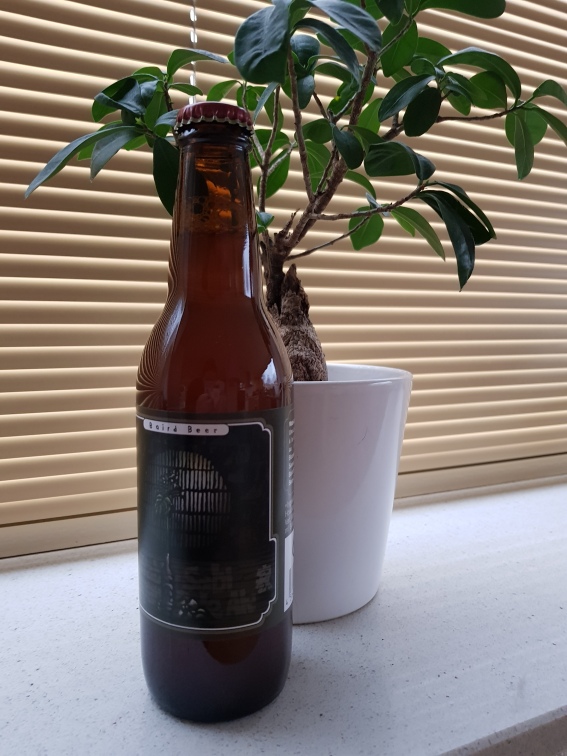 Colour: dirty amber/golden with some sediment.

Taste: light and floral. Apparently made with green tea, though it tasted kind of like roses to me. Slightly hoppy but well balanced, delicate. 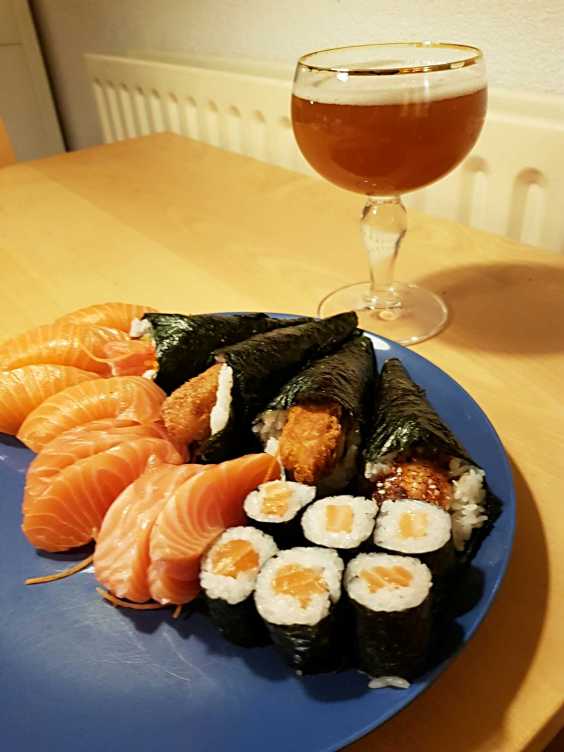 Personal comments: I liked it, it was nice and light, but I was a bit disappointed not to taste any of the mentioned wasabi. Maybe it’s because I had it with sushi and I mix a lot of wasabi into my soy sauce, maybe it’s because I already had 6 beer samples before it and my taste buds had taken a brief recess, or maybe it simply wasn’t there. It was a nice beer anyway.

About this beer type: there’s a bunch of different types of pale ales about, the most famous/widespread in later years probably being India Pale Ale (or IPA). They get a lighter colour from being brewed with lighter coloured malts. They are sort of the middle ground between lagers and stouts, having plenty of flavour without getting too heavy. They tend to have a malty sweet flavour with floral or citrus notes. I wasn’t able to find any specific notes on Japanese Pale Ale.