I’ve been having this craving for eggplant parmesan (I use and love this recipe), but with feta cheese and jalapeños instead of mozzarella. So I figured I’d “Greek it up” a bit, by not only substituting feta for mozzarella, but also adding spinach and sweet peppers to the tomato sauce, and using both eggplant and zucchini for the breaded veggie layers. Oh and also adding some jalapeños as in my minds eye this recipe needed a little bit of a spicy kick.

A note on the eggplant:

And it really needs prepping, DO NOT skip this step. For years I was ignorant of the ways off eggplantivity and kept being puzzled by why it always tasted amazing when I had it at a restaurant and always tough, chewy and just plain weird if I used it at home. It’s because I didn’t prep.

So what you want to do is slice it into roughly 1 cm thick slices, lightly salt both sides and set it to drain for about 2 hours. You can probably leave it for a little less time, it’s ready when it has brownish liquid pooled on top and starts to sag, like so: 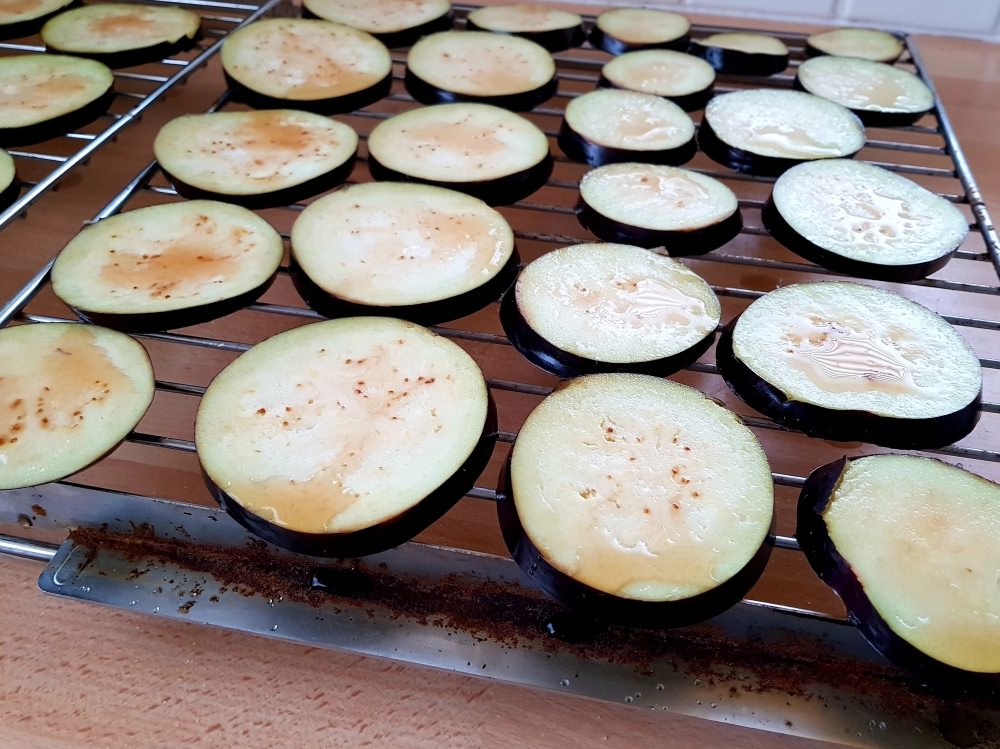 After some experimenting my preferred method is to then: rinse off the eggplant slices to remove excess salt, and squeeze them a bunch at a time between my palms over the sink to really get as much moisture out as possible. This last bit is probably not necessary, but I feel it tastes better and more like the stuff I’ll get served in restaurants if I do this. Plus we’re breading the eggplant so no-one will notice if the slices look a bit smooshy.

I was worried the zucchini slices would get soggy and leak moisture in the oven and that they’d need to be prepped in a similar manner, but I didn’t find any online sources to back this up, so I decided to skip this time-consuming step. This worked out fine, and the zucchini was crispy on the outside and juicy on the inside.

Servings: 4-5 (you can definitely get 5 or maybe even 6 servings out of this calorie/nutrition-wise, especially if you serve it with a salad and/or bread, but we’re big eaters)

You can definitely adapt and mix and match here, for instance use only eggplant or only zucchini, add some more spices, use less jalapeño if you don’t like spicy food, etc.

Beat 2 eggs in a bowl. Mix all the breadcrumbs and about 60 grams of the parmesan, plus a little black pepper and any other herbs or spices you want in another bowl (I usually do this in two batches and refill the bowl when I’m getting low).

Prepare eggplant as mentioned above. Slice zucchini also in about 1 cm thick rounds. Dip the slices first in the egg and then a breadcrumb and parmesan mix. *

Place slices on baking paper covered sheets. You should get roughly 2 baking sheets worth of slices. Drizzle veggies with a little olive oil, then place one sheet in the middle of the oven and one underneath. Bake for 20-25 minutes, until golden. Flip the slices and swap the position of the sheets half way through the baking time.

While eggplant and zucchini are in the oven, make the tomato sauce.

Put a large pan over medium heat with a little bit of olive oil in it. Add chopped onion, then garlic (you can chop or press, I’m lazy and don’t taste the difference so I use a press), then the chopped sweet peppers after minute or two. Sauté for 4-5 minutes until peppers are soft. Add both types of tomato, vegetable stock, pepper, smoked paprika and a squeeze of lemon. Mix together, then add spinach. Stir in the spinach and let simmer for 10 minutes or so. The spinach will mean it looses that lovely red colour, but it tastes so good and has all those delicious vitamins and iron.. 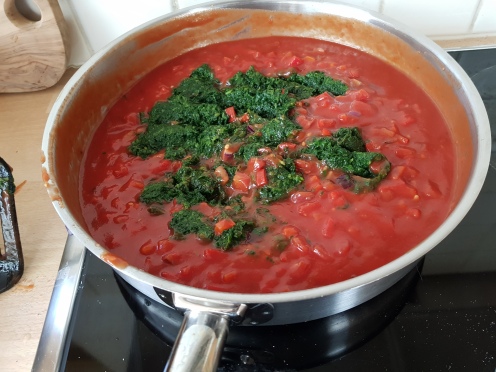 Add about 1/4 of the tomato sauce in an oven proof glass dish. Layer zucchini/eggplant rounds on top until completely covered. 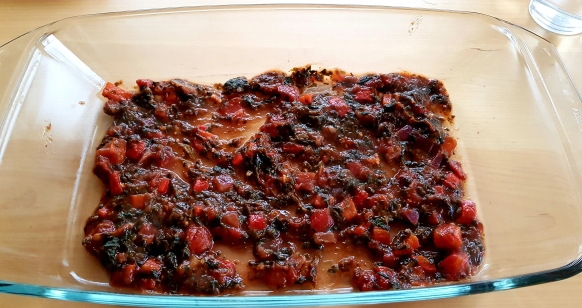 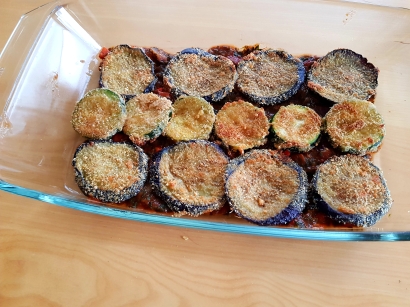 Crumble roughly 1/3 of feta cheese over vegetable rounds, then 1/3-1/2 of the chopped jalapeño.

Bake uncovered in the middle of the oven at 200 degrees for about 30 minutes.

It tastes exactly like a mix between eggplant parmegiano and jalapeno poppers, which was just what I was going for. Greeeat success! If that sounds gross to you, move along… But I thought it was fabulous. Just the right level of spiciness for me too, though J said it was a little too spicy but he’s a wuss. 😉

Obviously, as feta cheese does not melt in the same way mozzarella does, it doesn’t have that stringy, gooey, cheesy thing going for it that the original recipe does, but if you like feta cheese and a little bit of a kick to your recipes you’re gonna love it!

Healthiness: medium. Obviously there’s a lot of saturated fat and sodium because of the cheese, but it is mostly veggies and also has a great variety of veggies in there to give you plenty of vitamins. It also has a decent serving of dietary fiber and protein. It’s not a light meal, but it’s also probably more of a weekend dish in regards to prep time as well – so a semi-healthy comfort food alternative on a chilly day.

*The original eggplant parmesan recipe I based this on says to dip in flour before egg, and then only in the breadcrumb/parmesan mixture, which I find redundant with eggplant but with the zucchini this does help the crumb mixture stick a little better.